As a graphic designer and illustrator you have to speculatively tender for a lot of projects, projects that often you don’t end up getting. So when we finished our proposal and rough visual for the LNER Community Stadium artwork and pressed send on the email, I hoped that wouldn’t be the last we saw of it but in reality I knew it probably would be. So it came as a pleasant surprise when a few days later they got back in touch with us and asked to see some more!

Over the next few weeks we exchanged a number of emails, trying out ideas, refining content and composition and eventually settling on decisions for all the important aspects of the illustration. Then the real work started. We set to work turning an A3 pencil sketch into a detailed, full vector, illustration capable of being reproduced at a massive scale with no loss of resolution.

Drawing the vector illustration took roughly two weeks, but then there were the inevitable amends that come with such a large project, with a large number of interested parties, all with their own interests, opinions and requirements.

It was soon after final sign off and then the final sign off after that, that the pandemic rolled into town. That, coupled with the delays already incurred by the stadium construction, stopped the project dead in its tracks. And there it stayed, stalled, ready to go, but not. Going that is.

Once things eventually started moving again the problem of actually installing an illustration onto a massive stadium entrance façade raised its head again. It had been a worry right from the beginning. With multiple different sizes being provided by the architect’s plans, the builders, the folk who fitted the cladding and even some people who claimed to have been down there with an actual measuring tape. Plus the entrance is not actually flat, but made up of three separate planes, each tapering down to meet at the door, which is about a foot set back from the outer edges. This means the art work has to be distorted along these three planes so it meets correctly at each seam. And that is not the end of the problem, as each individual plane is itself made up of a great many separate cladding panels. Safe to say, application of a massive sticky vinyl graphic to these panels is not a simple matter.

Fortunately at this point we were introduced to Banana Kick, a digital marketing agency who had been engaged by LNER and York Council to help with the Community Stadium project in general and the entrance graphic in particular. Banana Kick were reassuringly professional and competent and, it turns out, able to map out the artwork to each cladding panel and make the necessary distortions so that it all worked and fitted perfectly!

August, and between downpours of rain, pandemic spikes and snap lockdowns, somehow the final graphic starts to get installed. By early September it is ready. Unfortunately the inaugural game where the finished graphic would finally be unveiled is cancelled due to Covid 19. Disappointing but the sort of thing we’ve come to expect these days; and the main thing is still achieved. Our final artwork has finally arrived at the LNER Community Stadium, and we are proud. 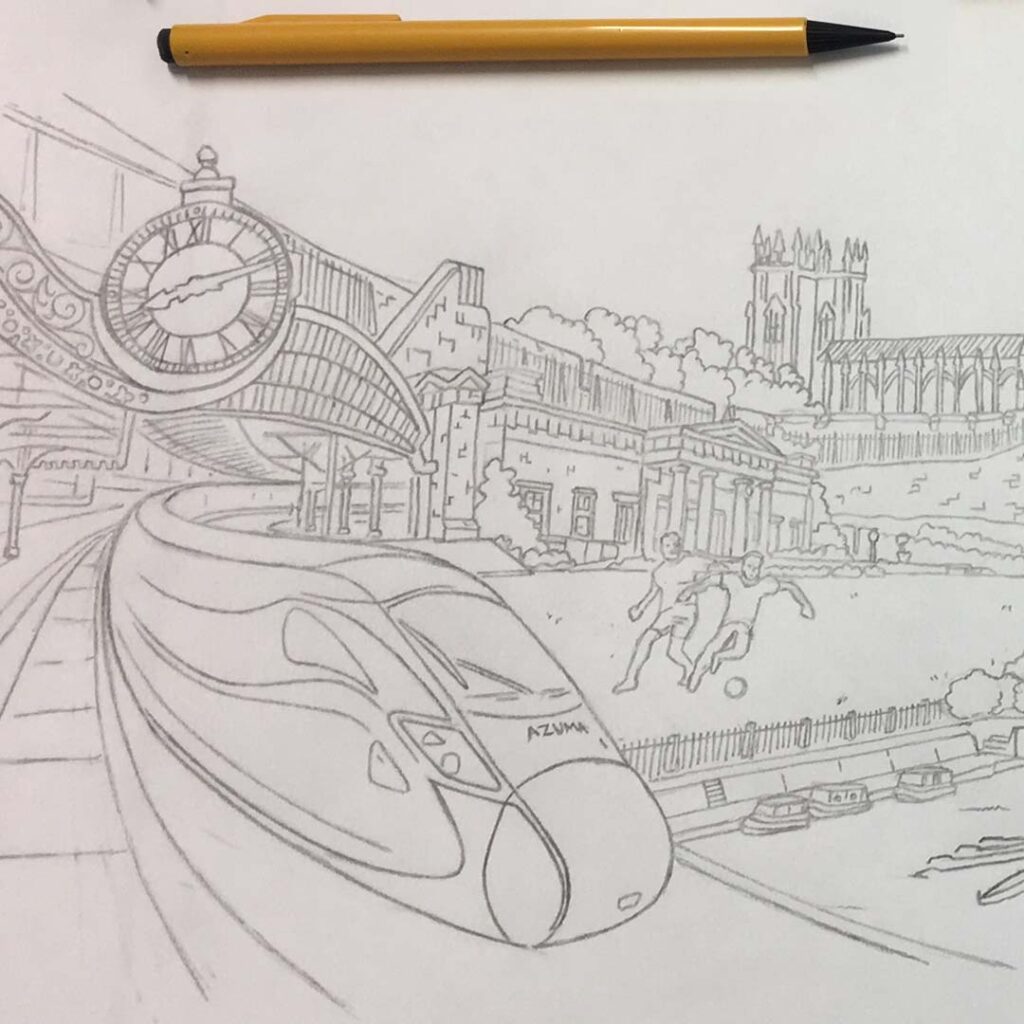 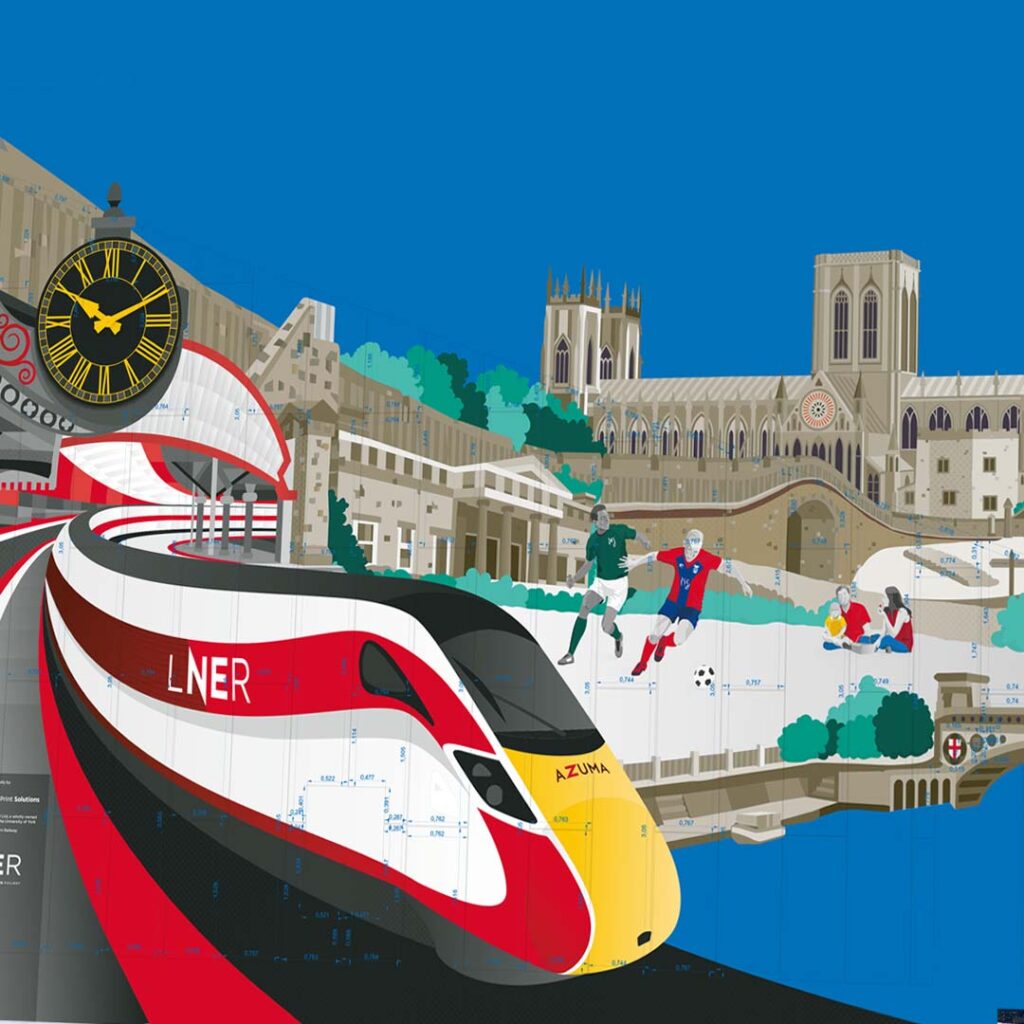 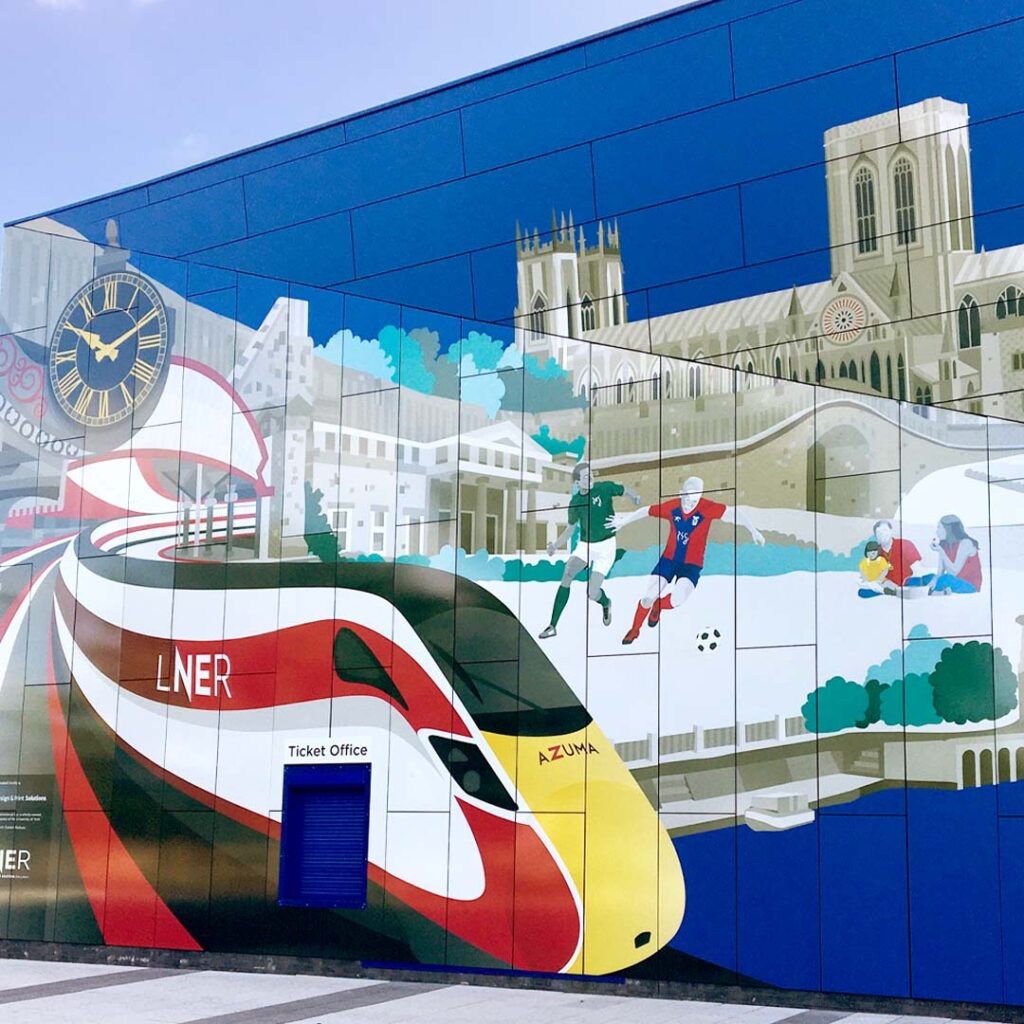